The Bakewell Pudding, or Bakewell Tart as many people now call it, is a delicious blend of three of England’s favourite desserts: the flaky, melt-in-the-mouth pie, the sweet jam tart, and the rich egg almond custard. The Bakewell Pudding is created by combining all three mouthwatering concepts into a single treat, and the result is a delectable, tantalising dessert that’s bursting with flavour. While there are many different ways to make a Bakewell Pudding, such as swapping out raspberry jam for cherry jam, or adding a layer of icing to finish, we use the traditional family recipe.

Although the Bakewell Pudding is a very flavourful dessert, traditional Bakewell Pudding recipes actually use very few ingredients to achieve the finished product. The main ingredients are flour and butter to make a buttery, flaky pastry case; raspberry jam for the centre of the tart; and eggs, sugar, and ground almonds which make up the frangipane-like topping, which is placed over the jam layer. Some recipes may also include lemon zest to offset the sharpness of the jam, and sliced almonds for a decorative finish. The combination of flavours has made the Bakewell Pudding one of England’s best-loved desserts.

The Pudding – the true Bakewell classic 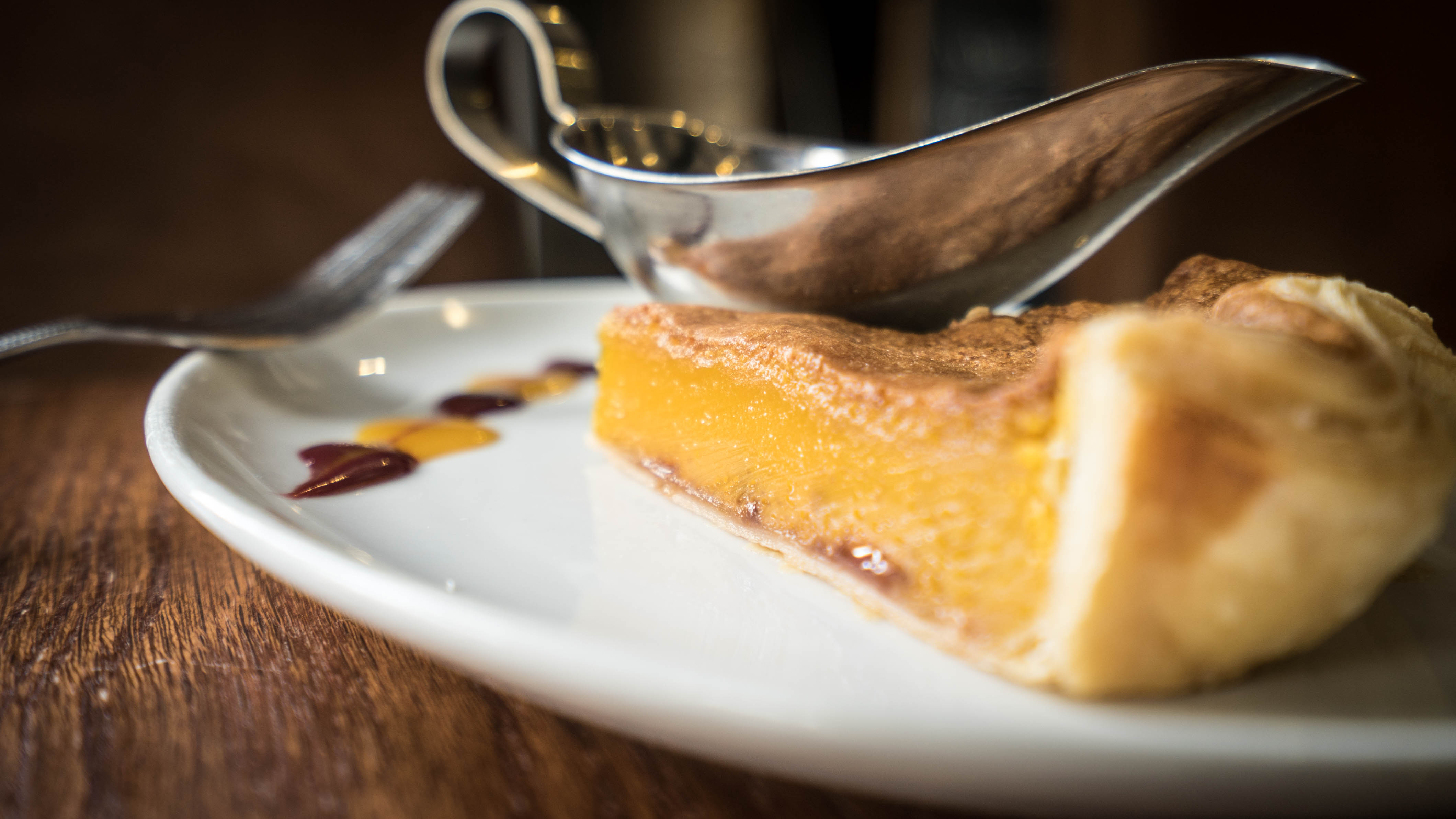 Many Bakewell Pudding recipes recommend blind baking the pastry case first, before adding in the jam. This not only helps to keep the pastry crisp and flaky, but also minimises the absorption of flavours, keeping the flavour of the jam strong, bold, and fruity. Once cooled, the jam layer is added to the pastry case, followed by a thick paste made from the eggs, sugar and ground almonds. The Bakewell Pudding is then baked in an oven until a perfect golden brown. When cooked, the almond topping solidifies and sets slightly, to create a rich and creamy egg custard consistency with a luxurious taste and texture. 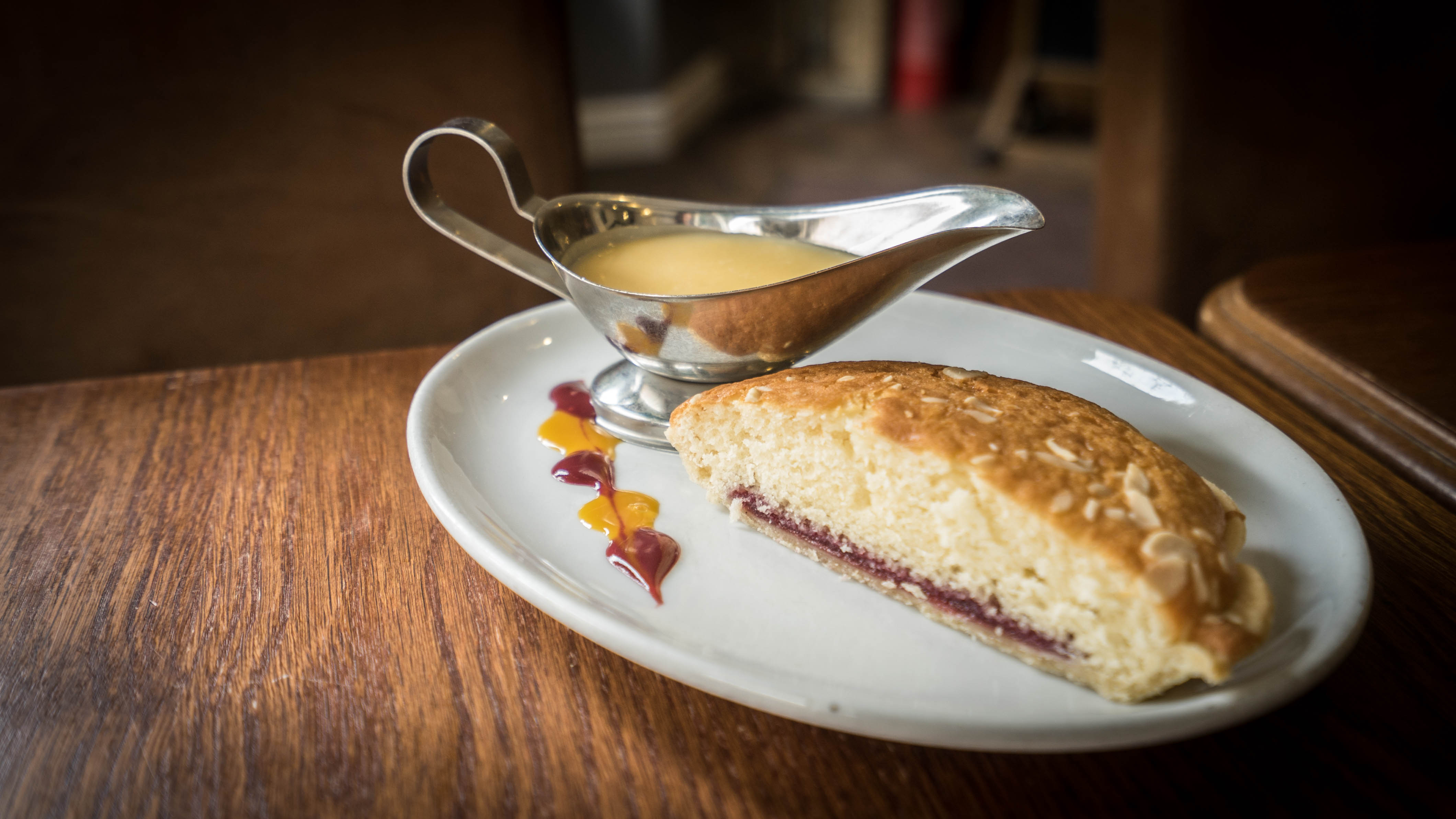 The Bakewell Tart – made by many, loved by all.

Who invented the Bakewell Pudding? That’s something of a local Bakewell mystery. What we do know is that the term ‘Bakewell Pudding’ first appeared in an 1826 version of The Cook and Housewife’s Manual, although the earliest recipe did not pop up until 21 years later. While many different establishments claim to be behind the invention of the dessert, the mistake was made at the Rutland Hotel by the cooks assistant who poured the mixture into the wrong pastry base and hey presto the Bakewell Pudding was created, by accident!

Since the early 1800s, many of Britain’s most well known bakers have tried their hand at making the perfect Bakewell Pudding; Mrs Beeton, who used breadcrumbs instead of pastry, and Eliza Acton who didn’t use any sort of base at all. At The Bakewell Pudding Parlour, we believe in getting it right each and every time, and sticking to the traditional recipe that our family have been using for more than 50 years. We think that we’ve got it spot on, and the growing success of the Bakewell Pudding Parlour, particularly of our Post a Pudding service, tells us that our visitors do too. We simply won’t settle for second best.